Woman, You Do Too Much

Every once in a while, I run across an article about some woman feeling broke and exhausted from teaching yoga. Usually the authors are faced with a yoga injury, family responsibilities, a late rent check or competing in an evolving yoga market.

Are men are socialized to easily say NO?

While many women feel the burden over the yoga profession after years of teaching, I’ve noticed that,  50 and 60 something-year old male yoga teachers like Gary Kaftsow, Rodney Yee, Leslie Kaminoff, John Schumacher or Yirsir Ra Hotep seem to have longevity. As women rise in the ranks of respected teachers, I think it is important to practice self preservation.

What are the men doing differently that helps them to persevere? Are men socialized to easily say no? While women still are socialized to self sacrifice and say yes?

I used to never say the word NO.

In today’s world, reciprocity and self-preservation are the rules of longevity. Yet most women feel obligated to give of themselves without considering the consequences. I know first hand because I used to never say the word NO”.

I wanted to be liked.

If my business partners broke their promises, I’d overlook it. Some days I’d talk on the phone with clients instead of preparing for a yoga class the next hour. I wanted to be liked. I wanted to please and I liked feeling needed. But when I was faced with injuries, pregnancy and clientele changes, I’d realized that I needed to say NO.

A great pose for finding your feminine strength is Goddess Pose.

It requires that you open your heart but also strengthen your inner thighs, core, pelvic muscles and spine. With an exposed heart, Goddess Pose also forces you to secure other parts of the body with an integrated awareness. Goddess pose teaches that you can be open and giving while also being strong and secure.

In, the yoga tradition that honors the mother Goddess is called Durga. Unlike Mary, from the Bible, Durga does not represent passive love. 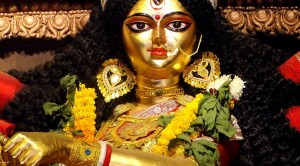 She is a protector and preservationist. Durga knows when to set clear healthy boundaries. She is loving yet she is equally discerning. Durga says NO to protect herself and those she loves.

I wasn’t accustomed to putting myself first.

At first, saying NO as a yoga teacher made me feel mean, rude and dismissive. I wasn’t accustomed to putting myself first as a teacher. I viewed the practice of yoga as a loving labor of spirituality and movement. While these components are vital. Yoga is also about self awareness, self development and  avoiding self harm.

Saying no, comes at a price. You may lose clients, opportunities may wane, but you will gain in your emotional stability. I don’t care how long you can hold a scorpion or headstand,  if you can’t hold on to your standards, set clear boundaries and continue to love, how is your yoga improving your life?

For more on the Goddess Durga

READ THE COMMENTS OR ADD YOURS